Jangadeiros – the raft fishermen of northeastern Brazil – hold a special place in the hearts and minds of the Brazilian people. Like the cowboys of the wild west they have come to symbolize a way of life more simple and pure. The jangadeiro is a free man, living life as he wants, without constraints, beholden to none. He is a humble man—a fisherman—more in step with the natural world around him. He is courageous, confronting the elements to provide for himself and his family. He is fair, knowing right from wrong, treating all men as equal.

A lot of this is fantasy, painting a picture more perfect than reality. But much of it isn’t. Much of the jangadeiro’s iconic status, unlike our celluloid cowboy, has been earned through a long history of sticking up for those more oppressed, and fighting for their own rights in rather bold ways.

In 1884, Ceará became the first Brazilian state to abolish slavery, largely due to the efforts of the jangadeiro community. Led by a man called the Dragon of the Seas (Dragão do Mar – Francisco José do Nascimento), the jangadeiros refused to load slaves onto ships (jangadas were used as lighters), and similar to the Underground Railroad in North America, they helped slaves escape by sailing them to safety up and down the coast. Campaigning for abolition, the Dragon traveled by ship to Rio de Janeiro, Brazil’s capital at the time, to deliver a jangada named Liberty to the emperor, Dom Pedro II. Though the monarch refused to meet him, the jangadeiro was celebrated as a hero in the city and his trip was considered a political success. It was another nail in the coffin that helped Brazil pass the Golden Law (Lei Áurea) in 1888, abolishing slavery throughout the country.

The next protest trip occurred in 1941, when four jangadeiros actually sailed a jangada (the São Pedro) from Fortaleza to Rio de Janeiro, a 1,650 mile voyage on the open ocean. Their goal was to gain disability and retirement benefits for fishermen, equal to those had by other trade unions in Brazil.

Commanded by another colorfully named jangadeiro, the Alligator (Jacaré – Manoel Olimpio Meira), the small raft made the journey in sixty-one days, hop-scotching down the coast to garner public attention. It worked. Not only did the fishermen become national heroes along the way, international media followed their trip and the famous director, Orson Welles, decided to include them in a series he was working on at the time – It’s All True (released in 1993 as a documentary: It’s All True: Based on an unfinished Film by Orson Welles).

When they arrived in Rio, the four jangadeiros were greeted by thousands. Their jangada was hoisted from the water and carried by hand to the presidential palace. (Brazil was now a republic.)  This time the gates were opened and the president of Brazil, Getulio Vargas, came out to greet them. Two days later the law was changed to give fishermen their benefits. 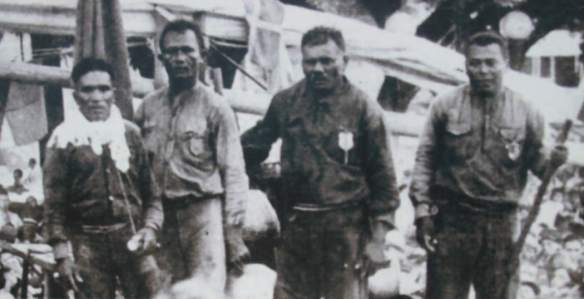 Fifty-two years later, in 1993, four jangadeiros again took to the sea in protest, sailing a jangada named S.O.S. Sobrevivência (Survival) from a small fishing village in Ceará, Prainha do Canto Verde. Though they followed the same route as their predecessors, the goal this time was not so easily gained. Taken from a flyer produced by the trip’s organizers:

“S.O.S. Survival wants to call attention to the difficulties faced by artisanal fisherman and stimulate a dialogue with local, state and federal authorities (the organs responsible for fisheries control), the press, and the general public.”

The voyage was successful in this — it spotlighted the issues confronting the artisanal fishermen in northeastern Brazil, and helped unite different communities in the area to put more pressure on the government for action. But the difficulties the fishermen faced at the time have only gotten worse. They are the same problems encountered by millions of traditional fishing people throughout the world today: collapse of fisheries due to industrial fishing, lack of comprehensive fisheries management, weak enforcement of existing regulations, unchecked development, and a changing environment.

We are familiar with this type of story in one form or another. It is a very serious story.

The SOS jangadeiros didn’t give up. In 2009, after years of petitioning the federal government, Prainha do Canto Verde was granted status as a Marine Extractive Reserve (MER). This gives the fishermen more control over the land and sea they have lived on for generations. It’s a start, but a tenuous one — the reserve area is small and the pressures from outside are not so small. At this writing less than 2% of Brazil’s vast marine waters are protected. If traditional fisheries are to survive in Brazil, more attention needs to be given to them. Nobody understands this better than the jangadeiros. In their own way they are still sailing ahead toward a better, more sustainable future.

The following story is not so serious. Mostly it’s just a boat trip: a fishing trip I made on a jangada with three jangadeiros. It is my attempt to pay tribute to some fishermen who greatly impressed me, and to the amazing little sailboats they have used for centuries – their jangadas. 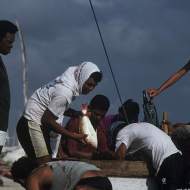 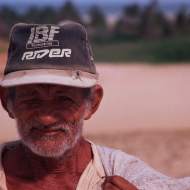 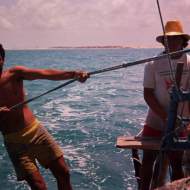