I didn’t so much walk back to the stern as hobble, using the heel of my right foot as a pivot. Any other pressure on the sole felt as if I was walking on coals. The puffy pink foot looked a little freakish, jutting out at an angle. Mamede and Ze tried not to stare as I limped aft: heel-step-rotate, heel-step-rotate. (No wonder Ahab was so damn testy.) Thank god the ocean was flat or I would have keeled right over.

As I approached, Mamede glanced down and asked, “Does it hurt?”
ONLY WHEN I FUCKING WALK!
“No, Mamede. Not too bad.” More lying but we’ve already established a bias toward that. At least it wasn’t getting any worse — the foot that is.
“Good!” he bellowed. Clearly there were more important things to consider, and they had to do with the spool in his right hand. The monofilament fiber was a heavy test line (please don’t ask me the weight) with enough of it wrapped around the batten to reach down to China.

“You can use this,” he said. “It’s new, so the line shouldn’t break. Watch out for tangles when you bring it up.”
Having seen the bales of line that bunched around the jangadeiro’s feet when they raised their hooks, I was much more confident of tangling the line than catching anything with it.
“Okay, Mamede.”

Dropping the spool in the basket, Mamede’s hands shot out and grabbed both my wrists. The quickness of it startled me. I tried to resist but my arms were no match for his. Realizing he wasn’t going to hurt me, I did my best to relax. But what did he want with my hands?

He rotated my wrists and brought my palms up for a closer look. Hard to see in the shadowy light, so he dropped one hand, then ran his fingers over the palm of the other. His callused fingertips felt like coarse sandpaper against my tender flesh.

“Hmm. . .” he grumbled, doing little to arrest my growing anxiety. Certain he was going to shout, USELESS, then pitch me overboard, Mamede instead turned to Ze and asked, “Do you have an extra glove? He’s going to need it.”

He was referring to the leather sheath Ze wore on his right index finger.
“No, but he can use this one,” said Ze, slipping the glove from his finger and reaching over the icebox to hand it to me.
“Thanks, Ze,” I said. “I don’t think I’ll be using it for very long.”
“That’s okay—keep it. I need to make a new one anyway.”
Generous Ze. He must have been a middle child too.

Getting the glove onto my finger was like putting on a ring one size too small. Compared to mine, or any other living human for that matter, Ze’s fingers were skeletal. In fact, it required little imagination to see his bleached bones swinging on a rack in some medical school classroom. And he’d be easy to spot too — the skeleton with the biggest grin. Eventually I got the glove seated, opened and closed my fist a couple of times to stretch it, then held up my hand to show Mamede.

“Good!” he boomed again, though he was standing right next to me.
(What it is about Latin languages that incites all this shouting?)
“Now we put on the isca.”

Mamede grabbed a couple of small fish from the icebox lid and placed them on the steering bench. I already knew what happened next, though it took some time for him to find what he was looking for in the clutter on top of the icebox.

“Here it is,” he exclaimed, holding up the araçanga. “This makes them look more alive.” He proceeded to rap the side of each fish with the small club, breaking up the cartilage so they would be more flexible. “Now we put in the hook, ” he said, motioning for me to grab my spool. “You do it with me.”

We each took a fish and I followed along, first threading the hook through the tiny mouth, then back along the dorsal line. While I did this, I couldn’t help but think that the fish had recently been alive, swimming around with the same life energy that swam through me. It was caught trying to feed on something lower down the food chain, and would now be used to catch something else higher up — ultimately feeding us at the top. The big fish eat the little fish and so on down the line. We keep messing around with the links on that chain and there will be just enough of it left over to hang ourselves with.

Mamede inspected my work when I was done. He tugged gently on the fish and then handed it back. “Good!” he said. “You will be a jangadeiro.”  He was being kind, I knew, so I didn’t bother correcting him. Besides, my actions would soon speak for themselves.

“Now put the isca in the water. Go up to the banco and work from there.  Just do what I do and you will catch a fish.”

I dutifully shuffled forward, heel-step-rotate, holding the spool in one hand and the sinker in the other. Dangling from the short leader in between, my little fish was ready for action. I’d be lying (again) if I said I wasn’t excited. The expectation of actually catching something with my bare hands was knocking on the door of yet another memory — that kid again. But this time he was combing the hills behind his house for whatever lizard, snake, or bug he could lay his grubby little hands on. It had been an obsession for a while, and the menagerie of creatures occupying the various mayonnaise jars and shoe boxes in my bedroom were enough to give any mother nightmares.

I felt like I was eight again, sneaking up on a long-tailed lizard dozing in the sun. Holding that handline had the same directness about it, the same finger curling expectation. It tapped into my predatory instincts far better than holding onto a fishing pole. There was nothing to get in the way, nothing to buffer the catch, nothing to tip the balance of power overwhelmingly in my favor, making the end a forgone conclusion. Just my hands and the line — one degree of separation. And so, reaching over the side to let go of the sinker, I couldn’t help but whisper,  “I’m going to get you. . .” 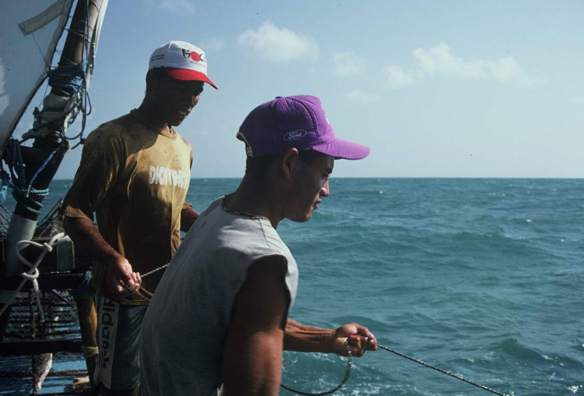