Now that the sun was gone, the wind at our bow started to die down. Only the land’s latent heat continued to drive it on.

“How much longer until we reach the fishing grounds?” I asked, hoping it wouldn’t be long. We had been standing on a bucking deck for fourteen hours and I was physically exhausted. My legs and feet ached from the strain, and my hands, well cured in brine, were starting to feel like ham-burger patties, holding my coarse espeque lines.

“We still have more to go,” Mamede responded, “but we can check.  João, vamos ver.”

Without a word  João unwrapped the lines from his wrist and stepped forward to open the hatch. He had to be quick — the occasional wave still washed over the deck. Diving into the hold he rooted around until he found what he was looking for. “HA!” came the muffled cry from below. When he climbed back out he holding a thick spool of fishing line. There was enough moonlight to see it clearly, including the heavy slug swinging from the end.  Closing the hatch,  João stepped to the windward rail by the tabernacle and started to strip the line from the spool, letting the nylon fall in a pile by his feet. Halfway through the roll he stopped and looked back at his captain. “Pronto!” he shouted. “Ready!”

None of these actions would have merited much attention on land. But João wasn’t on land, he was on a very big ocean, standing on a deck that was pitching and rolling. And it was nighttime. And the only thing he was holding onto was the fishing line in one hand and the sinker in the other. Back and forth his body swayed as if his feet were glued to the deck.

Mamede luffed the sail to slow us down, and at the top of the next wave João heaved the slug forward with an underhand bowl, grunting sharply as he let it go. Consumed by black water, I could only tell the lead was descending by the line twitching swiftly through João’s fingers. Seconds later the twitching stopped and the line was pointing straight down. We were riding over the sounder.

João bobbed the line to make sure the slack was gone, then started to haul it up. He did this methodically, bending down to grab the line at the rail, pulling up with one hand while drawing the fiber through the other, rotating his torso to the lifting side until his hands were spread apart as far as they could go, the line stretched across his chest. He paused just long enough to count, then let go with the upper hand and pulled with the lower, repeating the procedure on the other side. Working in this fashion from side to side, as if performing elaborate toe-touches,  João was able to determine the number of braços under our keel.

“TWENTY-TWO!” he called out when the sinker hit his palm.

Twenty-two braços equals twenty-two fathoms. By convention, a fathom equals six feet of water: the result of normalizing the depth obtained throughout sailing history in a manner similar to what I had just witnessed. We had no electronic depth sounder on board, only the human kind, and his name was João.

There were 132 feet of ocean under our keel, plus or minus depending on the actual length of João’s braços. 132 feet? . . . Really? . . . That’s all? . . . It seemed way too shallow for the distance we had traveled from shore. Off the California coast it would have been over a thousand feet deep. But along the northeast coast of Brazil, the continental shelf runs out about fifty miles, and it descends at a shallow slope approximately equal to one fathom for each nautical mile (1 m/km). So measuring the depth gave us a good estimate of how far out we were: 22 braços ~ 22 nautical miles ~ 25 statute miles ~ 41 kilometers. Choose the units you prefer.

“Twenty-two braços,” Mamede repeated, more for my benefit. “Still too shallow. Thirty braços—that’s where the fish are.” He had already pulled back on the tiller to get us going again.

Soon after this we saw a small flickering light off our port bow. Mamede altered our course to meet it. Thirty minutes later we were sailing up to an anchored jangada with four young fishermen standing on the deck. Mamede freed the mainsheet and we coasted silently toward them.

So focused on their handlines, the fishermen didn’t notice our approach until Mamede called out, “Oi!” across the short length of water. Instantly four heads snapped up in startled unison. I was surprised to see just how young they were: adolescent boys with that awkward, knobby-kneed look kids have at that age (growing faster in some places than others). Like most teenage boys their “room” was a mess, with line, spars, and canvas strewn about the deck, leaving little room to work. Their jangada was also a wreck. Most of the paint was scraped off the hull and deck, and the rail was deeply gouged from years of use. It was an old wooden boat, worn out and tired, no longer cared for by its owner.

Having no money and little experience, younger jangadeiros are usually left with the oldest jangadas. They have to prove themselves before moving up. This jangada probably leaked like a sieve, making it difficult to get any rest down below. Hard to sleep with water sloshing around your head.  The boys were clearly exhausted. Dressed only in ragged soccer shorts, skin stretched tight around ribs and joints, they looked more like teenage zombies.

The boy at the transom was older than the rest. Mamede spoke to him.
“How long have you been here?”
The boy hesitated, as if trying to remember.
“Three days.”
“Everything good?” Tudo bom?
The boy shrugged his narrow shoulders.
“And the fishing—is it good?”
“More or less. Not so much tonight.” Mais ou menos.
“It’s still early. Where do you come from?”
“Parajuru.” (A fishing village to the east of Prainha.)
“And you go back tomorrow?”
“Yes.”
Mamede paused for a few seconds, looking them over.
“Well—good luck, then.” Boa sorte.
The young mestre didn’t say anything. They all just stared back.
And that was that.

We had drifted apart, but were still within the halo of their deck light. It was like an island that light, pushing out the night. Mamede brought in the mainsheet and we slowly pulled away. It was a quiet departure — our mood had changed from the brief encounter.

Mamede seemed more bothered than the rest and I wondered what he was thinking. Did he see himself in those tired young men, know what the future had in store for them, know it was probably more of the same, year after year after year? Or was he just concerned for some boys that could have been his own? I knew he had two sons about that age. Did they also fish, and if so, why weren’t they fishing with their father?

Maybe it was just me feeling uneasy. I couldn’t help but think about what I was doing at their age: sitting in a class waiting for a bell to ring, riding my bike in the sunshine, playing games with my friends — doing boy things — not hauling a handline in the middle of the night, miles offshore on a leaky jangada.

For another half hour I kept looking back, watching as their light got smaller and smaller, blinking on and off like a firefly in the distance. And finally the light blinked out. Did they really exist at all or were they just ghosts — phantoms of another sort?

Shortly thereafter Mamede cleared his throat and said in a weary voice,
“We stay here tonight.” He had been steering for over sixteen hours. 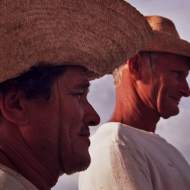 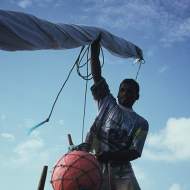 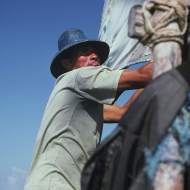